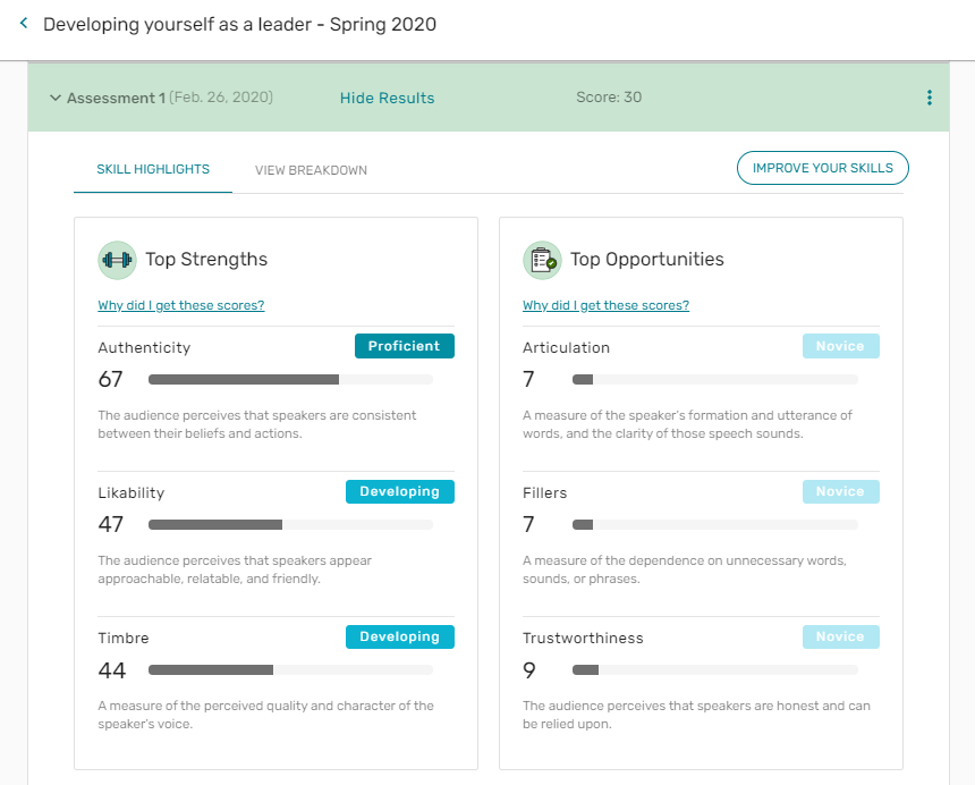 Tommaso Padula lives in Milan, Italy, with his wife. He has a degree in business administration from Bocconi University, he currently works as a brand strategist at Artefice, an Italian brand consultancy firm, and he dreams of one day starting a business in the food sector.

He is also a Harvard Business School student who recently completed HBS’s online course, Developing Yourself as a Leader. As part of that course, he was granted access to Quantified’s platform to measure and improve his professional communication skills in the English language — both during the course and over the next twelve months.

We were thrilled when Tommaso reached out to us to share just how impactful his experience with the Quantified platform has been. He volunteered to share his experience with you, and we hope his personal story will inspire others to work toward similarly incredible results. Please note, the interview below has been lightly edited for length and clarity.

Quantified: How did you hear about Quantified? What did you initially think?

Tommaso: I was introduced to Quantified through the HBS online course Developing Yourself as a Leader. We had two assignments that required us to use the platform. At the outset, I was afraid it would be a distraction from other aspects of the course, but I quickly discovered that my leadership communication skills were the weakest point in my leadership style and that, if I wanted to grow as a leader, I had to tackle the fact that I was not yet a strong communicator.

Quantified: How was your first experience with the platform?

Tommaso: My first experience with the Quantified platform was straightforward. Using the tool was easy, but until I received the first score report I did not fully understand what the tool really did.

We recorded videos in response to two different “professional scenarios,” and when I received my first scores, I was quite demoralized. I knew that my public speaking skills were poor, but I did not expect the difference between my scores and my peers’ to be so great. My initial QC Score was a 30 on one scenario and a 40 on the other, compared to the class average of 58. Luckily, though, the platform doesn’t just provide a score, but also it gives details about how that score is achieved. In analyzing the report, I immediately focused on my strengths in order to identify any competitive advantage I might already have. I discovered that my top strength was in Authenticity, where I’d scored a 61. I was glad to see that for two reasons:

Tommaso: In order to improve my QC Score, I first looked at the top development opportunities the platform had identified. Trustworthiness was my lowest score (11), and that’s where I had the highest chances of improving.

At the outset, I did not understand that score because I would have imagined that Authenticity and Trustworthiness were highly correlated. However, looking at the legend that explained each score, I could see that Authenticity means that the audience perceives that I am consistent between my beliefs, words, and actions, whereas Trustworthiness means that the audience feels confident that I’m not being deceptive. In short, I realized that when I speak, people feel that I am sincere and present, but I look insecure, and that makes them wonder if I’m hiding something.

I immediately verified this by watching the platform-recommended example video to see what best-in-class trustworthy communication looks like. The two speakers were calm, they looked straight at their audience, and they spoke at a good pace, ultimately reassuring their audience that not only were they honest (authentic), but they were fully capable of following through on their messages.

Subsequently, I recorded various videos in which I imitated the example speakers’ styles. When I felt that I made some progress, I uploaded a new video to the Quantified platform to evaluate my results. I was thrilled to see the score grow so significantly.

Quantified: How do you use the platform in an ongoing manner?

Nowadays, I follow a clear process to improve my QC Score — and my communication skills — in video after video:

This process of intense focus on one skill at a time brought me from a QC Score of 30 to 57 on one scenario and 40 to 68 on the other.

See Tommaso’s improvement for yourself.

Overall, my score went from the “developing” stage to “proficient” in twelve weeks. In particular, I increased my best score — Authenticity — by 28% to 79 and my lowest — Trustworthiness — by more than 300% to a 47. While Trustworthiness remains my weakest skill, I’m proud of my progress and eager to keep working at it. Quantified: How have you seen the Quantified feedback impact your professional performance?

Tommaso: I started to use Quantified just before the COVID-19 pandemic, so I have not yet had the opportunity to test my newly developed skills in the usual office context. However, it really supported my professional performance in the new, Zoom-oriented working environment. Indeed, thanks to the Quantified experience, videoconferencing is just my cup of tea. My colleagues and clients were often uncomfortable speaking in front of camera, and they had a lot of difficulties delivering high-quality virtual presentations while I was already a natural.

Technology aside, several friends and colleagues have pointed out that my communication style has changed completely (for the better!), and my confidence improved greatly with the Quantified platform. At the beginning of the Harvard Business School course, I wasn’t very active in live classes because I was scared to speak a foreign language in front of sixty people. But after I started to train with Quantified and improve my QC Score, I also became more active in class, ultimately receiving a Distinction on my final HBS Developing Yourself as a Leader certificate, which wouldn’t have been possible without Quantified.

Quantified: What are you inspired to do next with the platform?

I have set some personal QC Score goals that I want to achieve as soon as possible, divided into milestones to help me celebrate progress and not get discouraged as I strive for my biggest goals. I know that it is a challenge that it will takes months, and I plan to treat it like a marathon. Congratulations to Tommaso on this incredible progress. We can’t wait to see where your continued training takes you!

To learn more about the Quantified Platform and how it can help you achieve your biggest leadership communication goals, request a demo, and one of our experts will be happy to walk you through our platform and process.